Don't Judge Someone Just Because They Sin Differently Than You Do

Don't Judge Someone Just Because They Sin Differently Than You Do 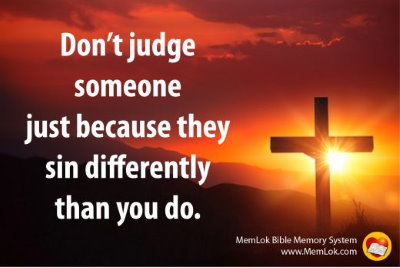 Most of the time we take this verse in complete disregard of the context primarily to silence someone as a way of saying “who are you to tell me I’m wrong?”

Looking at this verse, some might say that we are supposed to exclude the negative assessments as well. That we aren’t allowed to assess others or say anything even if they are wrong.

The question is: Is looking at the verse in isolation the right way of interpreting Jesus’ command?

Because immediately after verse 5 Jesus says…

“Do not give dogs what is sacred; do not throw your pearls to pigs.” Matthew 7:6

And later on He says:

“Watch out for false prophets. They come to you in sheep’s clothing, but inwardly they are ferocious wolves. By their fruit you will recognize them…”  Matthew 7:15-16

How can we figure out who are dogs or pigs or discern the false prophets? Isn’t Jesus asking us to judge?

We Aren’t Called to Be Superficial, Unforgiving and Self-righteous

We Aren’t Called to Be Superficial, Unforgiving and Self-righteous

No matter how much we try, sometimes we pass judgment on other people before we have a chance to stop ourselves.

It could be over small, inconsequential things like a co-worker who won’t answer the phone. Or how somebody may dress inappropriately. Or someone who acts selfishly and hurts our feelings.

When we judge others considering we are right and their sin is bigger than ours, we fall off track. No sin is big or small. Sin is sin.

Pastor Jack Gibbs was speaking at a prison. His first words were, "The only difference between you and me is, you got caught!"

That said, as we quickly jump on conclusions about why someone did this or that, we accept satan’s lie: "A guy caught in sin deserves both barrels!"

Whereas Galatians 6:1 says: "Brothers, if someone is caught in a sin, you who are spiritual should restore him gently. But watch yourself, or you also may be tempted."

So what’s the right way?

"Don't Judge Someone Just Because They Sin Differently Than You Do."

How Can We Learn to Obey Jesus and Stop Judging Others?

How Can We Learn to Obey Jesus and Stop Judging Others?

The Bible teaches us how God wants us to use this ability to distinguish good from bad and discern what’s of God and what’s of the enemy without falling into the trap of judging others.

Judging others for things we already are doing makes no sense and is disapproved by God.

With lots of verses in the Bible, I highly encourage you to learn how to obey what God has commanded.

How to do that?

Partner with us to learn to love instead of judging when someone sins differently than you.

"MemLok could easily go for much more than what you pay for it." - Pastor Jeremy

P.S. - The MemLok Mobile App is now available in five Bible versions.
"Don't Judge Someone Just Because They Sin Differently Than You Do."